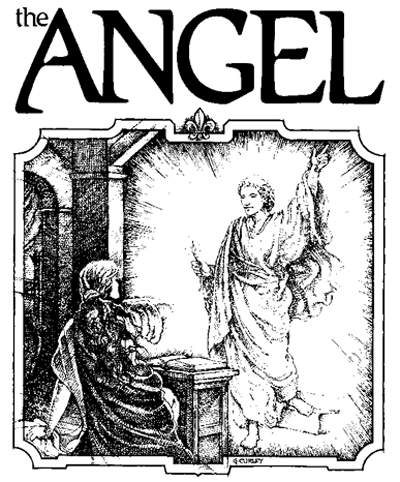 But the angel said to her, “Do not be afraid, Mary, you have found favor with God. You will be with child and give birth to a son, and you are to give him the name Jesus.” (Luke 1:30-31)

Before a multitude of the heavenly host publicly proclaimed, “Glory to God in the highest,” the lone angel Gabriel privately announced to Mary that she had found favor in God’s sight. What can we learn from the angel this Advent? What message is for us in his proclamation to an adolescent farm girl?

Like all angels, Gabriel is a servant, a messenger. His glorious appearance is meant to draw attention not to himself but to the One who sent him and to the message he’s been entrusted with.

“You have found favor with God,” he told an awestruck Mary. Perhaps it is ironic that Mary has become an exalted, sainted figure today, for she would never choose such honor for herself. Mary understood that God chooses the last to be first, the weak to be strong, and the faithful to be favored.

While the announcement by Gabriel culminated nine months later in a sky-swelling song by an uncountable heavenly host the night Jesus was born, it is this first lone angel who sets the tone for our Advent, putting us on alert for the miraculous. His appearance reminds us that in spite of the ordinariness of the surroundings and characters, Jesus’ birth was an extraordinary, heavenly event.

If you celebrate Advent by lighting candles and reading Scripture, let this week’s candle symbolize the Angel. Read Luke’s account of the angelic visits to Mary and to the shepherds. And remember that, like Mary, any of us can have the honor of participating in God’s plan for the world if we remain faithful and humble.