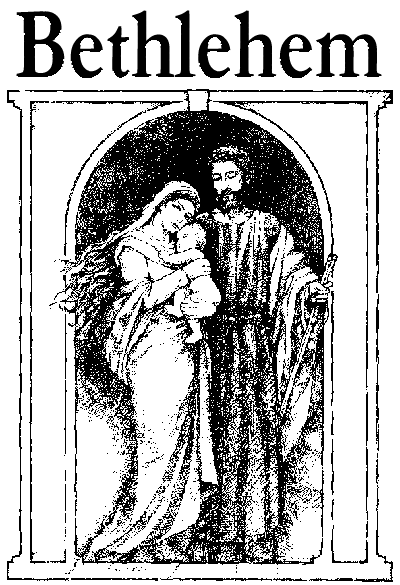 But you, Bethlehem Ephrathah, though you are small among the clans of Judah, out of you will come for me one who will be ruler over Israel, whose origins are from of old, from ancient times. (Micah 5:2)

Because of the census demanded by Roman Governor Quirinius, Mary had to travel from her hometown in an advanced state of pregnancy. As a result, Jesus was born in the small town of Bethlehem, fulfilling the ancient prophecies of the Old Testament.

Bethlehem was a small, insignificant village, but on the night of Jesus’ birth it was probably busier than usual. Jews from all over Israel had come to be counted. It is also likely that there were Roman government workers staying in the village. This was a busy and distracting time.

Into the hubbub and confusion, our Messiah was born. Few people noticed. Overwhelmed with the pressures of politics and the commitments of commerce, few noticed a crying infant born to a poor family in someone else’s stable. Did anyone realize that the world would never be the same?

Today, all these Christmases later, we still find ourselves busy, distracted, and overwhelmed. But the Messiah still comes. Whether we are aware of Him or not.

If you celebrate Advent by lighting candles and reading Scripture, re-light the first candle to remember the Angel‘s invitation to participate in God’s plan. And then let this week’s candle symbolize Bethlehem. Read the first seven verses of Luke 2, and recognize yourself and your own busy-ness in the ancient story. Then spend some time quieting your soul to reflect on the Christmas child.