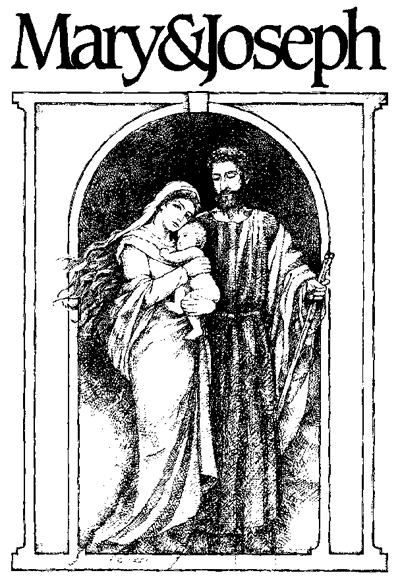 When Joseph woke up, he did what the angel of the Lord had commanded him and took Mary home as his wife. (Matthew 1:24)

In a sense, Mary and Joseph represent two ends of a broad spectrum of faithful obedience. Both chose to accept God’s assignment—though it meant personal sacrifice and public embarrassment. But Mary’s obedience made her an exalted example revered around the world, while Joseph’s obedience has been largely forgotten.

His role in the Christmas story is no less important than Mary’s. Not only did he minimize the damage to her reputation by agreeing to go through with the wedding, he actually saved her life: Jewish law would have stoned an engaged girl found carrying someone else’s baby. Even before receiving angelic encouragement, Joseph had set aside his own pain and questions, and had determined not to make life any more difficult for the girl who, it seemed, had broken his heart. This is a Godly man.

We don’t read in any of the Biblical accounts that Mary rushed to explain her situation to Joseph—or to anyone for that matter. And perhaps that is exactly what makes Mary perfect for the role God had her play. Throughout the story, she simply accepts her assignment—not because it is an honor, but because she has been asked. She accepts the judgement of her neighbors, the whispers behind her back, the tears in her mother’s eyes. Perhaps she dares to hope that Joseph will not reject her, but she knows that if keeping the baby means giving up the wedding, she is prepared to give up the wedding. She follows God, one step at a time, ready for Him to provide. This is a woman of faith.

Mary and Joseph are examples of God-centered selflessness. They gave up the lives they were planning on in order to begin living the life God asked them to live—a more difficult, more lonely, more painful life. Is it possible their selflessness had any influence on the Son they raised, who would one day give up His life too?

If your Christmas traditions include Advent readings and candle lightings, pause for a moment before lighting this week’s candles. Is there some small sacrifice you can make, some obedience you can offer, someone else’s need you could meet this Christmas?

Then re-light the first candle to remember the Angel’s invitation to participate in God’s plan.

Re-light the second candle to symbolize God’s arrival in the midst of Bethlehem‘s busy-ness.

Re-light the third candle in memory of the shepherds, who dropped everything to meet Jesus.

And light the fourth candle to represent Mary and Joseph, whose unsung selflessness is an example for us at Christmas and throughout the year.

Advent is over: Jesus is here!

Epiphany: the “Wise Men,” Herod, and Me

2 thoughts on “Advent 4: Mary and Joseph”