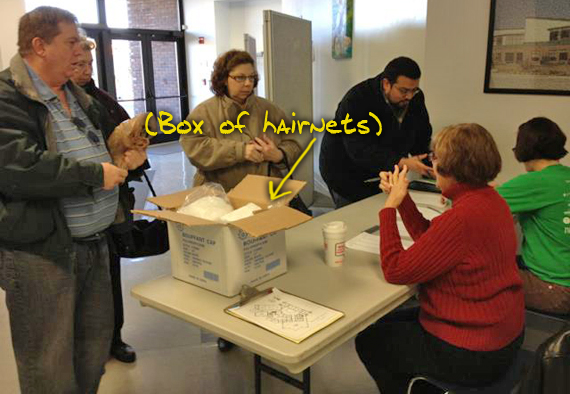 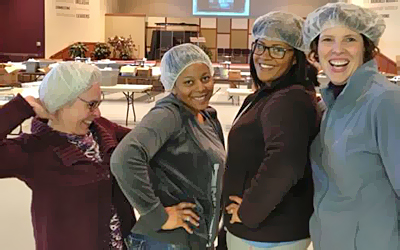 When I showed up at the event, the woman at the registration table handed me a hairnet and pointed me in the direction of the meeting room. I took a few pictures of other people in hairnets, and we all laughed about how this little piece of elastic and gauze could make it so hard to recognize each other. 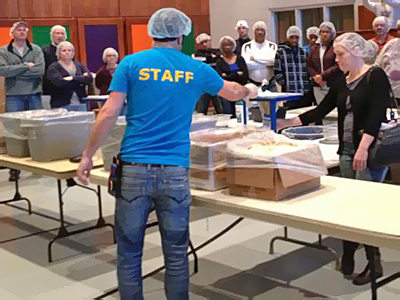 In the meeting room, we listened to instructions from someone in a “STAFF” t-shirt, and we watched a video. From there we were dismissed to the main auditorium, where another hairnetted, t-shirted STAFF member told us to circle around. He gave us specific, easy-to-understand instructions, and then we broke into teams. At each of six stations, team members decided who would take which roles. All of the jobs were simple, but some required a longer reach, or the ability to read small numbers, or faster organizational skills.

For the next 90 minutes, the 12 people in my work area (Team 2, as I like to call them) scooped, measured, poured, weighed, sealed, counted, and boxed 132 Manna Packs—little bags of rice, soy, vitamin powder, and powdered veggies. Each bag would feed 6 people.

I was at the boxing station, so each time the lines of volunteers on either side of me finished scooping, measuring, pouring, weighing, and sealing 36 bags, I packed them into a cardboard box—6 rows of 6 bags—and then flagged a member of the warehouse crew to bring the box to its next destination. The work was not hard. It required some concentration and some speed, but once I learned the basics, there was plenty of time for joking around, helping other stations, dancing to loud 80s classics, and shouting out encouragement. The time went fast. Before I knew it, my shift was over, and Team 2 had packed 22 boxes.

All the jobs were little: putting labels on bags, writing numbers on boxes, pressing a heat sealer for three seconds, placing sealed bags into a box. Simple. Little. I didn’t have to ask how many bags would fit in a box—that answer had already been figured out. I didn’t have to know where to bring my box after it was packed—there was already a system in place, and someone else knew what to do. The people who measured and weighed didn’t have to wonder if they should try and fit more soy powder in the bag—the amounts had already been determined. We just had to show up, follow instructions, and work as efficiently as we could. 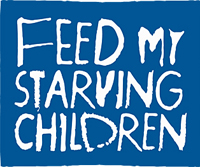 The big work had already been done. It was started by a man named Richard Proudfit, who founded an organization called Feed My Starving Children. Richard was an engineer, a businessman, a Merchant Marine, an entrepreneur. He used his skills to gather the people and develop the systems necessary to do the big things—like inventing the Manna Pack, and partnering with on-site agencies in food-deprived countries, and actually deciding that it should be possible to wipe out hunger in my lifetime. Those are big things that I can’t do.

Someone has to do the big things. Without the Richards of the world, 24,000 people would still be starving to death every day. Thanks to Richard’s vision and big thinking, that number is down to 6,000 per day now. Wow.

But someone has to do the little things too. A big vision doesn’t feed anyone unless someone steps in to scoop the rice and tape the boxes shut. Big and little need each other.

People like Richard do the big things—systems, organizations, vision.

People like me do the little things—following instructions, packing boxes, cheering for my team.

When we recognize our need for each other, amazing things happen.

What does this have to do with LifeLines? And you? Well, there are a lot of possible applications.

For example, have you stopped working on your family memoir because you’re afraid it will never be a best-seller? Don’t think like that. Your family stories will mean as much to your kids as the “great American novel” does to the rest of the world. Those little stories are a big deal.

Are you a nonprofit eager to get a big gift from a major donor? That’s ok—but those big gifts are no more important than all the small gifts from faithful donors who believe in your work. Those little gifts—and prayers, and volunteer hours—are a big support.

Are you a small business trying to become big? Don’t forget the little things. Remember that your frontline staff are as critical to your success as the people in the corner offices.

Big and little need each other.

Together they accomplish great things.

If you need help finding a vision or developing a system or writing your life story, I can’t help you with that. That’s too big for me.

But if you need help wording your vision statement or writing instructions for the people in your systems or editing your manuscript, that’s a little thing I’m really good at.

Contact me to see if we can work together to accomplish something great.