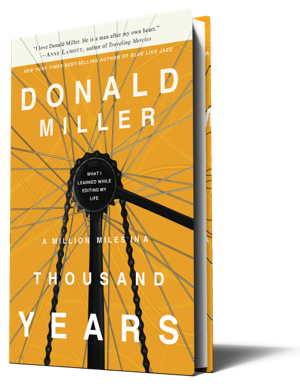 In A Million Miles in a Thousand Years: How I Learned to Live a Better Story (available in a variety of formats from Amazon.com), Donald Miller describes the transformational experience of having a movie made of his life. He is a writer himself, and he worked with a couple of Hollywood screenwriters to adapt his own life story into something people would want to watch in a theater. During the process, he discovered that he wanted to live a life that would be worth watching! “My Real Life Was Boring,” he titles one of his chapters. But making a movie of it gave him a chance to rewrite it.

So he added adventures and drama to his life so that he could include them in his screenplay! And he started living this new, noble, inspiring story. He began a workout regimen so he could participate in a bike ride across America. He reached out to the father who had left him. He started an organization called The Mentoring Project to help other kids who don’t have the fathers they need. Donald Miller re-wrote his life!

Miller’s experience reminds me of a scene from The Chronicles of Narnia. After Peter, Susan, Edmond, and Lucy spend a lifetime in Narnia as kings and queens, they suddenly return to England, where they are children again, in school, with curfews and errands. In the movie version of Prince Caspian, you get an almost-physical sense of the frustration they feel at having to live a mundane story instead of the grand adventure they were meant for.

Is that your frustration as well? Are you so consumed with meetings and bills and groceries, that you can barely imagine yourself slaying dragons?

Do you need to re-write (or at least edit) your life story?

The idea is intriguing. And difficult. Not because of any particular danger; just because of how gradually and anesthetically the mundane story seeps back in.

But the fact is, we are already characters in a dramatic story—sons and daughters of a King, who have been kidnapped, abused, and deceived by an Enemy intent on destroying the world. As we are set free from his POW camp, we realize the truth, remember our cause, and re-join the King on the front lines.

So what one, small, noble thing will you do today to remind yourself of your royal lineage and your crucial mission? Will you write a thank-you note to an old teacher? Will you teach your children to play chess instead of watching TV? Will you dust off the stairclimber and pretend you are scaling mountains to safeguard your homeland? Will you re-read at least a verse a day from the ancient story that’s already being written for you?

But stick with it. Transformation takes time.

It can take at least a million miles and a thousand years.