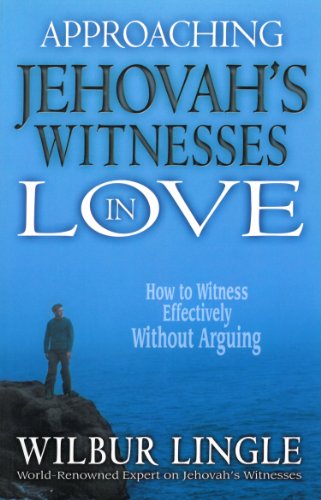 Several weeks ago, when CLC Publications asked me to review Amy Carmichael’s Plowed Under, I did some research on their website and noticed Wilbur Lingle’s book there. Because this is a topic that interests me, I asked if I could also review the Lingle book, and CLC was kind enough to send me a copy.

What sets Lingle’s book (and his evangelism methods) apart is his strategy. Lingle is not interested in winning arguments with the Jehovah’s Witnesses who come to his door—at least not the arguments they have on their agenda, which they are very prepared to debate. Instead, he works to deflect their attention back to their own religion. His contention is that the Watchtower Society’s teachings cannot stand up to scrutiny, but most JWs do not know this because they are taught never to question the organization.

I think this approach is brilliant, and ultimately loving. In fact, there were times in my conversations with my neighbor that I was in effect employing this approach, but I wasn’t doing it systematically, as Lingle does, so my effectiveness was probably marginal.

Of course, what’s difficult about laying out a strategy like this, and listing question after question after question in a book (almost courtroom-transcript-style), is that it doesn’t feel very loving. Lingle’s subtitle is “How to Witness Effectively Without Arguing,” but  the questions and answers in black-and-white read very much like an argument.

And, actually, that same dynamic is involved whenever Christians interact with Jehovah’s Witnesses. It is easy to get drawn into a series of arguments. Lingle warns against that because he knows that JWs are highly trained in arguing, particularly about topics that are not “essentials.” (You don’t celebrate birthdays because they are mentioned only twice in the Bible and both times they were an occasion for gruesome deaths? Um, ok, if that’s what you want to infer from Genesis 40 and Matthew 14, feel free.) So his purpose in listing so many questions and answers is not to script a debate, but to help prepare Christians with as much background information as possible. It is up to us then to ask these questions as gently as possible, always working to build a genuine friendship.

One of the key points Lingle makes against the Watchtower Society is that they continually change their beliefs—but they don’t talk about the change or admit that they had been wrong before; they simply introduce the new belief and pretend that they have always believed it. For example:

“Since the Lord has given no instructions whatever upon this subject, and since it is proper to do good deeds and think good thoughts upon any day, it cannot be improper, in harmony with general usage, for us to remember in a social way our dear Redeemer’s birth at this time. …The custom throughout Christendom of making Christmas Day a joyful one, by the interchange of little tokens of love in the family, and to the poor, seems most appropriate.”

In a conversation with my neighbor, I once explained that I would have trouble putting my faith in an organization that changed its teachings so often. “Jehovah’s Witnesses used to believe,” I said, “that Jesus should be worshipped. Now you don’t. That’s kind of a big deal to me.” She told me that there might be changes in some minor beliefs, but never on anything as important as Jesus. But when I tried to show her the research I had done, she wouldn’t read it because the sources I cited were not approved by the Watchtower.

Lingle’s book was updated in 2004, but even so, I noticed some differences between the beliefs he was confronting and my own conversations with my neighbor. To me, this is further indication that not only do the Watchtower’s beliefs continually change, but their tactics do too. It’s also a reminder that people are different, and it’s a mistake to assume that all Jehovah’s Witnesses are the same.

In spite of the possibility that some of the information is already out of date, I will keep Approaching the Jehovah’s Witnesses in Love in my library as an important reference tool. I think Lingle’s strategy is sound, and it’s helpful to have so much information about the Watchtower Society in a single book. Although I am no longer meeting weekly with my neighbor, we did manage to build a friendship over my kitchen table, and we continue to exchange pleasantries when we see each other. That relationship is important to me—because it means I might get other opportunities to have a genuine conversation about God and faith.

And that’s the thing about evangelism—sharing the Good News: As Jesus Himself demonstrated, it works best in the context of a relationship.

If you are interested in building a relationship with the Jehovah’s Witnesses, rather than hiding behind the door when they ring the doorbell, I recommend this book. Available from CLC Publications, it will help prepare you for the hard work that relationship evangelism demands.