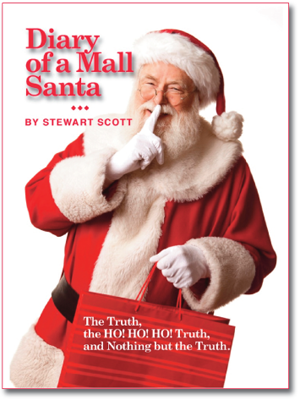 When my friend and fellow writer Stewart Scott emailed me in August to let me know he had published his first ebook, I was delighted. It was fun to watch his “I oughta write a book” turn into “I’m writing a book” and then into “I’ve written a book!”

I downloaded Diary of a Mall Santa immediately from Amazon.com and began reading it on my iPhone 4s.

Stew works as a mall Santa during the Christmas season, and his book is a collection of stories from those experiences. Most of the stories are quite short, but Stew gives enough detail that it’s easy to picture the people involved. Stew doesn’t try to force every story to teach a deep moral truth; he just lets them be what they are. Many are funny. Many are sweet. A few are sad. A couple are salty. But the collection offers a glimpse into childhood and consumerism and faith and tradition—as well as into Stew’s own tender heart.

It took me a while to get used to how short the stories are—at first it seemed as though they were ending too abruptly. But the more I read, the more I came to prefer the way Stew lets the stories speak for themselves. Sometimes he ends a story with an observation about children or parenting or junk food, but these observations don’t come across as “preachy.” Instead, they are offered as the personal opinions of a man who has seen a lot from his seat in Santa Land.

This is the perfect ebook to have on your phone or tablet while you’re waiting for a doctor appointment, stuck at a train crossing, or picking up the kids from a practice that ran long. Because the stories are short, and each is independent of the others, you can stop and start without losing the thread.

I recommend Stewart Scott’s Diary of a Mall Santa for anyone who loves a good story. You can download the ebook from Amazon by clicking any of the links on this page.