Well, our third and final Christmas rebus puzzle, was in fact the most difficult of the three. (I almost declared myself the winner!) But slowly, gradually, correct answers came jingling in, and finally about mid-morning on Day 2, I had some winners. Those winners are:

Jean’s answer arrived via an email from her sister Karen, so they may have to share the glory and celebrity that go along with winning a LifeLines Christmas Rebus. In fact, the Racek sisters’ path to victory looks like this:

Christmas Queen Michelle claims she was giving other people a chance to win, and that’s why she didn’t submit the correct answer until 6:30 P! M! Whatever. In spite of her delay, she was unable to keep herself out of this week’s list of Christmas Rebus Winners. Well done, Michelle!

Andre managed to squeak his answer in just before midnight last Wednesday, beating out a number of incorrect guesses that had trickled in throughout the day. Andre also won Round 2 of last year’s Christmas Mondegreens. It’s good to have you back, Andre!

Speaking of incorrect guesses… Several contestants submitted Jingle Jangle Jingle as their guess for last week’s Christmas rebus. I considered allowing this as a correct answer because the vowel sounds are so close. But when I Googled “Jingle Jangle Jingle,” I learned that it is not even a Christmas song! So, no. No go.

The fact is, only four people altogether submitted the correct answer, so I’m going to go ahead and name all four of them winners this week. Our fourth winner is—

Julie was just about ready to give up, mainly because it was already Day 2, and she assumed she was too late. She got hung up for a while on the blue jeans pictured in the rebus—she thought they were bell-bottoms and was trying to work “bells” into her answer. Finally, she gave the puzzle a fresh look, and the answer came to her, and she had the courage to go ahead and send an email at 9:19am on Day 2. Congratulations, Julie!

As I’ve mentioned above, the correct answer to last week’s rebus is Jingle Jingle Jingle (Gin + gull, Jenga + L, Jeans – S + gal). Some of you are wondering to yourselves, “Jingle Jingle Jingle? Is that a real song?” Well, yes my friends, it is, and I offer this YouTube clip to jog your memory—but I have to warn you that you may regret playing it after the song sticks in your head for the next two weeks:

As always, I had as much fun with this year’s Christmas game as most of you did—thank you for playing!

Have yourselves a merry little Christmas. We’ll meet again in the new year. 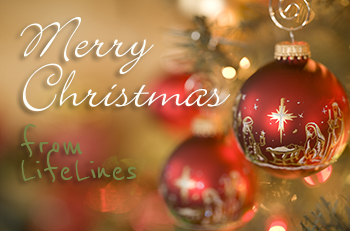