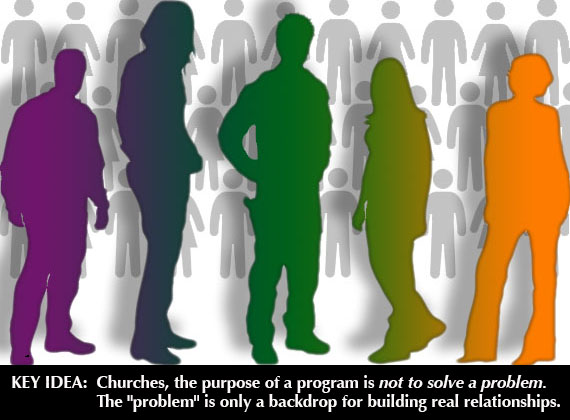 She didn’t like our church the first time she visited. She was used to something a little more pentecostal, a little more charismatic, perhaps a little more emotional. Living Springs was, ya know, okay, but she didn’t think she’d come back.

But then her husband, a new Christian, told her how much he liked it. He felt comfortable with the music, intrigued by the people, and challenged by the message. So she said, “Ok,” and they kept coming back.

And they got involved in some church programs.

In fact, when she looked at the long list of programs available, she thought, “Wow, this church really does what it says. This is for real!” Eventually, she joined the church and become an “official” member.

That, I think, is what church programs are supposed to do. They reflect a church’s beliefs and give people opportunities to serve and learn and make a difference. Programs can be an on-ramp to greater involvement and higher commitment and deeper relationships.

In fact, you could probably make the case that programs are necessary in our American culture, because Americans understand programs and excel at them. We search for children’s programs, singles’ programs, men’s programs, Bible study programs, youth programs, and the weekly Sunday morning program to meet our specific felt needs. And the “movers and shakers” among us will start a new program if we can’t find an existing one that does the job.

But sometimes we get too caught up in the program. We forget that the point of a program is to connect with people. We are so busy ladling bowls of soup at the shelter—that we forget to smile at the angry man who is embarrassed to be standing in line. Or we write off the church that doesn’t have a singles ministry—rather than inviting a few singles out for coffee ourselves. We are eager to organize the masses and find an efficient way to assembly-line their needs—because more is better, and faster is better, and bigger is better.

Except that it isn’t.

People are individuals. Each one is different.

Here’s what I think is the crux of the problem:

In order to “scale,” programs have to put people in categories and treat them all the same.

When you want to reach as many youth as possible, for example, you “target” that demographic with a message that depends on stereotypes to appeal to the broadest common denominator. You make assumptions about what “they” [all] need, and you send out thousands of slick postcards and glossy flyers because, after all, that’s what kids today are looking for.

That’s efficient, but it’s not effective. And it’s often offensive.

People don’t want to be targeted. That’s not a relationship—that’s stalking!

It’s much smaller and slower and less impressive to have a conversation over the fence with your 18-year-old neighbor. To ask his opinion on which printer you should buy. To attend a few of his football games. To gradually get to know him and his friends. As people. Not as a market segment.

Churches, the purpose of a program is not to solve a problem. The “problem” is only a backdrop for building real relationships.

There is a place for programs, but let’s be careful to keep them in their place.

4 thoughts on “Programs and people”