Etymology is the study of words’ origins and how their meanings and usage have changed throughout history. That may not sound interesting to you, but as a word lover, I can get totally geeked about etymologies. Hoping that you can too (at least a little bit), I share a few fun etymologies here:

The word goodbye is actually a shortened form of “God be with ye,” a common parting phrase used into the 1600s.

2. Not a great legacy

Tawdry often refers to things that are showy but cheap and poorly made. The word comes from a shortened form of St. Audrey, a seventh-century widow who developed a breast tumor that she claimed was caused by wearing necklaces of precious stones. To show support for St. Audrey, people began wearing inexpensive silk necklaces. In fact, after she died, silk necklaces were sold at St. Audrey’s Fairs, which were held on the anniversary of her death. Soon the word tawdry came to describe any costume jewelry or cheap finery. 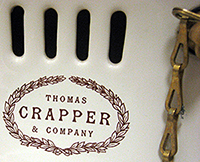 Thomas Crapper is the real, actual name of the man who invented the flush toilet, originally known as Crapper’s Valveless Water Waste Preventor.

UPDATE: The same day she read this blog post, subscriber Joan Schutt happened to be in downtown Chicago, Illinois, touring the Driehaus Museum, which she calls “a rare, little-known gem on Chicago’s Gold Coast.” Joan was delighted to find an original Crapper Toilet there, and she snapped a couple of photos with her smartphone and emailed them to me. Hilarious! 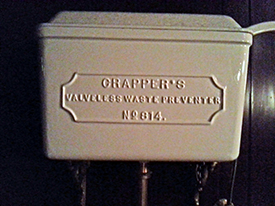 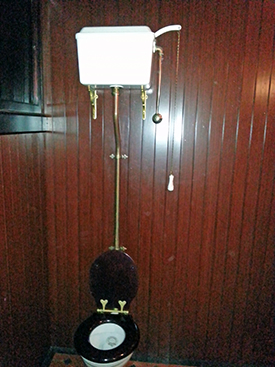 Star Trek fans will remember that the word sabotage is a form of the French word for shoe, sabot. As Lieutenant Valeris explained in Star Trek VI: The Undiscovered Country: “400 years ago, on Earth, workers who felt their livelihood threatened by automation, flung their wooden shoes, called sabots, into the machines to stop them. Hence the word sabotage.” This story remains unverified, however.

Salary comes from the word sal or salt, because it was the money a Roman soldier was given to buy salt, which was a precious commodity at the time.

6. Not an etymology, but interesting

There are a number of theories about why the letters K and W are used in radio station call letters:

7. Before there were showers

Eureka is actually Greek for “I have found it.” It was made famous by Archimedes, who was trying to find a way to calculate the percentage of gold in the royal crown. He couldn’t think of a solution right away, but he set the problem aside and took a bath—and noticed the water level change in the tub as he lowered himself in. Suddenly realizing he could use water displacement to solve the problem, he cried, “I have found it!”

The term free-lance was first used in 1820 to describe a knight who was available for hire, rather than being obligated to serve one particular lord.

Interesting, yes? If not, maybe you are not a word geek. And that’s ok. Not everyone is.

That’s why I make my wordsmithing services available to people who prefer to spend their time, you know, running their businesses, raising money for their nonprofits, or compiling their personal memoirs.

So if you need a freelance writer who makes you say, “Eureka!“—contact LifeLines.