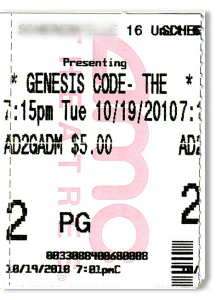 “You’ve got to see this Christian movie—it’s Hollywood quality, but it was made by Christians, and we have to support Christians as they witness in one of the darkest corners of our culture!”

Why do I always fall for this line?

Most recently, the Christian movie I “had” to see was The Genesis Code, which was in and out of limited theaters briefly last year. The Christian hype mentioned that this “Christian movie of the year” was populated with actual Hollywood actors and produced with Hollywood-quality graphics. Besides, the film also starred a local Christian from my area (not a professional actor), who apparently believed in the project so much that he put up the money to executive-produce it. After all, “We have to support Jerry!” I was told.

So I did. I fell for it again. I “supported Jerry.” I paid money to see The Genesis Code in a theater near me.

It was the worst movie I’ve ever seen.

The poor writing was probably the biggest culprit, but the tidy theology, the random locations, the stereotypical characters, the predictable outcome, and the amateur acting by the leads also share blame for making this “Christian” movie, well, lame. Offensive even.

Why do Christians promote this stuff? Do we honestly believe that these movies are examples of good story-telling?

Do we believe such movies are effective evangelism?

Do we sincerely enjoy them, or do we just feel like we should?

In addition to The Genesis Code, I can think of at least three other Christian movies that have made me wince. Am I being overly critical? Am I missing something?

What do you think about lame Christian movies?