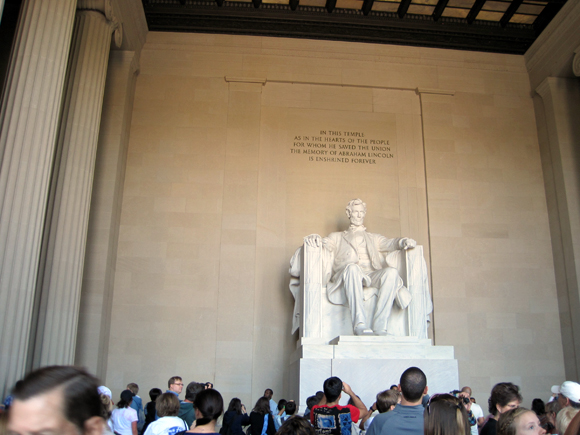 I ascended the stairway of the Lincoln Memorial and took my place in the crowd gathered around his iconic statue. The crush of tourists included babies in strollers, seniors in wheelchairs, women in saris, men in baseball caps, busloads of schoolchildren, families, couples, loners—each with a story, a personal reason for paying homage to America’s 16th president. And though hundreds of people may have stopped by in the time that I was there, the temple-like atmosphere within the 36 columns was hushed and respectful.

Most pilgrims come to see the marble statue that is housed in the center chamber of the structure. Sculptor Daniel Chester French honored Lincoln’s authority by portraying him seated on a “throne,” yet this position also seems to suggest the weariness Lincoln felt as he struggled to keep the States united. I learned later that French chose to sculpt Lincoln’s left hand clenched, and the right hand relaxed, to depict the determination and the compassion that were both necessary during Lincoln’s presidency.

Drawn to his words

But I found myself spending more time in the smaller chambers on either side of the Lincoln statue. The wall of the chamber on Lincoln’s left is inscribed with the words of his Second Inaugural Address, and I found myself moved to tears by the beauty of the language:

Fondly do we hope–fervently do we pray–that this mighty scourge of war may speedily pass away. Yet, if God wills that it continue until all the wealth piled by the bondman’s two hundred and fifty years of unrequited toil shall be sunk, and until every drop of blood drawn with the lash shall be paid by another drawn with the sword, as was said three thousand years ago, so still it must be said, “The judgments of the Lord are true and righteous altogether.”

The wall of the south chamber is inscribed with the words of the Gettysburg Address, another example of powerful word-crafting: 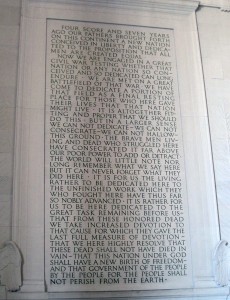 I doubt that Lincoln imagined his words would become a beacon that attracts people from around the world. I doubt he ever presumed his likeness would be sculpted in marble. And I doubt he envisioned such a diverse crowd would ever assemble around his feet. It seems more likely that he considered himself a failure. “He was derided in newspapers as ugly, stupid, a gorilla and white trash,” writes Ta-Nehisi Coates (The Atlantic) in a blog denouncing Ron Paul’s disrespect of Lincoln. (Well worth reading.)

And that’s the nature of language, of writing. Because powerful writing is an art, we can’t always predict its effects or measure its success. We can only work hard to improve our craft, and to better understand the truth we are trying to convey, so that we can more skillfully use the craft to convey the truth.

Lincoln was a master at that.

Get the book—Glimpses of Lincoln: Stories told by Himself and Others

6 thoughts on “Lincoln the wordsmith”