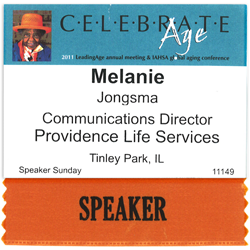 “How much of your time is spent on social media?”

This was one of the questions I fielded at the 2011 LeadingAge Conference in Washington DC last weekend. I was co-leading a session called “New Media to Enhance Your Marketing” with Randy Eilts, Director of Public Relations for GlynnDevins, a marketing firm that specializes in senior living.

LeadingAge is the new name of a group that used to be known as AAHSA—the American Association of Homes and Services for the Aging. Most members of the association are senior living providers. And, as is stereotypical of the senior living industry, most have not been eager to adopt social media. Randy and I were there to encourage them, to show them examples, and to warn them about the dangers of not using social media. Randy is a great communicator who brings plenty of data to back up his points, and he showed the group this convincing video by Erik Qualman:

(By the way, I love the quote from James Farley, CMO of Ford: “You can’t just say it. You have to get the people to say it to each other.” To me, that summarizes exactly the mind-shift that has to happen as people begin using social media for marketing.)

The 200 people in the session were very responsive, and their questions were thoughtful. Many of them want to use social media to share their company’s story, but they are not sure how to begin, considering their staff are already overwhelmed with other responsibilities.

That sense of overwhelm is probably what prompted the question I noted at the beginning of this post— “How much of your time is spent on social media?” My answer? “Essentially all of it.” That doesn’t mean I’m spending my whole day tweeting and commenting and posting. But it does mean that I assume everything I write is probably going to end up online, probably in multiple places, in multiple formats. It may start out as a newsletter article, or a business card, or a newspaper ad, but it will be repurposed into a blog post, a Facebook comment, a LinkedIn update, a web page.

And that’s another mind-shift that has to happen as you embrace social media—shift from thinking that social media is competing with other activities. Realize instead that it can actually enhance some of those activities and replace others. For example:

Addressing people’s fears about using social media reminds me of my grandmother, who, years ago, insisted she did not want a microwave, even though she lived alone and cooked for one. My mom got her a microwave anyway, taught her how to use it, and asked her to “just try it.” A few weeks later, Grandma was fully converted. “I don’t know how I ever got along without it!” she told my mom.

Maybe I’m overly optimistic, but I think my mom might say the same thing if she ever decides to “just try” Facebook. Maybe I’ll mention it (again) next time she asks me to get the photos off her digital camera and send them to Walgreen’s so she can print multiple copies in multiple sizes and then mail them across the country to her friends and family. Who are on Facebook.