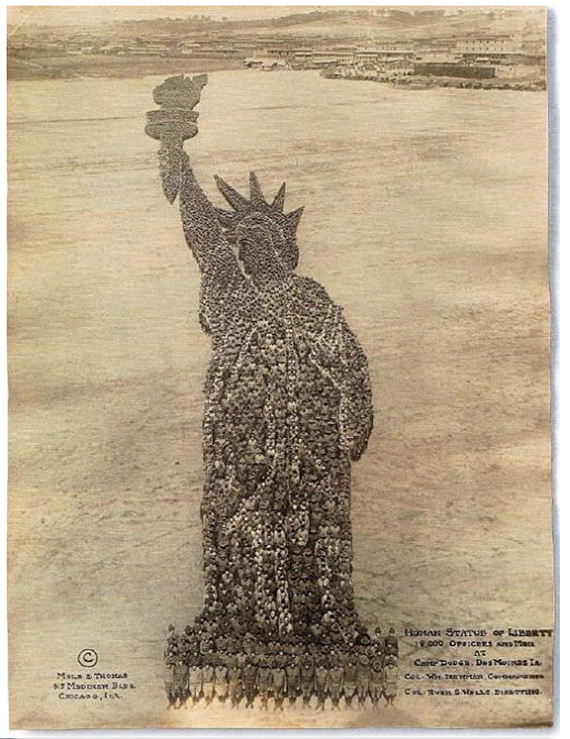 In honor of Independence Day in the United States, I’m sharing this old-timey photograph of a human Statue of Liberty. Clicking the image will take you to the Snopes article about how and why the photo was staged.

What’s really interesting to me is how the photographers took into account the perspective of the quarter-mile area they were shooting, in order to make the final image appear as though you are looking at it “head-on.” In the bottom row, you can see how large the soldiers appear; while in the tip of the flame, they are too small and too many to be individually counted. I can’t even imagine how to calculate those arrangements!

The purpose of this photo—and of other similar photos by the same photography team—was to sell war bonds. I don’t know how successful it was, but I think it’s a creative way to stir feelings of patriotism and appreciation for the troops.

And the process itself is somewhat reflective of the nature of America, as this quote from a participant shows:

In this body of soldiers are any hundreds of men of foreign birth — born of parents whose first impression of the Land of Freedom and Promise was of the world’s greatest colossus standing with beacon light at the portal of a nation of free people, holding aloft a torch symbolic of the light of liberty which the statue represents. Side by side with native sons these men, with unstinted patriotism, now offer to sacrifice not only their liberty but even life itself for our beloved country.

2 thoughts on “[Story Break] Perspectives on Creativity and Liberty”