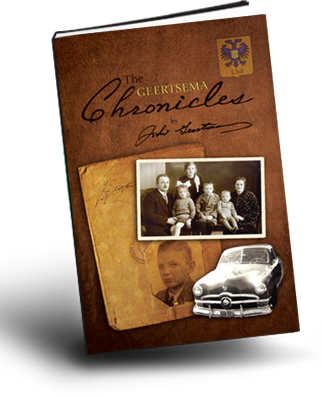 I received word a couple weeks ago that a client of mine had passed away.

John Geertsema was a veteran of the U.S. Army, and before that he helped the Dutch Underground during Hitler’s invasion of Holland. He was an avid fisherman, a grower of orchids, and a self-taught vintner.

He began writing the story of his life in 1994, when his family gave him a journaling book to help him get started. They wrote inside the front cover, “Dear Dad, We enjoy hearing you tell the stories of our Geertsema family heritage. We would love for you now to put down your memories in writing as a gift to us and future generations of our cherished heritage.”

And so John Geertsema began writing.

He dug in to the project and worked on it for 15 years. The book his children had given him asked questions that prompted memories, and he hand-wrote the answers, and then gathered appropriate photos, news clippings, documents, and other memorabilia to illustrate the stories he was sharing. He took his time and gradually built up a well-documented collection of memories about his childhood, his relatives, his early days in America, and the love of his life, Ann Wigboldy, who became his wife of 55 years.

In 2008 his daughter, Nancy Buis, enlisted my help. She had seen a book I worked on for a friend of hers (Let It All Out) and wondered if I could do something similar with the stories her dad had been compiling.

The Geertsema Chronicles turned out to be one of my favorite projects.

Success with the process

I’ve referred to Mr. Geertsema’s book a couple of times in other posts (Memoirs: enjoying the journey and Thanksgiving Top Ten) because I think it’s such a good example of what sharing your story is all about. Ideally, the process of remembering and writing will be as rewarding as the published product. John Geertsema experienced this:

Success with the finished product

John Geertsema could have been satisfied with the handwritten stories he had penned in the book his children had given him, and the corresponding pile of photos and clippings. But his daughter realized that leaving the stories in this form would not make them very accessible to the entire family—because only one person could “own” the collection at a time; because John’s handwriting may have been difficult to read; because photos could have become lost in the shuffle; and because documents would continue to get more and more brittle with age. Her idea of turning her dad’s work into a published book solved all of those problems. Here are some factors that made the finished product—the published book—a success:

When Nancy emailed me to let me know about her father’s passing, she included this note: “I am so thankful for you and your gifts. And that you were able to help us put together a truly wonderful gift for our family. It would not have happened without you. Thank you so much, Melanie.”

I consider it an honor to have been involved in The Geertsema Chronicles, and I will continue to use this project as a model for other would-be autobiographers!

What obstacles keep you from making progress on your memoirs or autobiography? Is it a feeling that you don’t know where to start? Or that you don’t have any stories worth telling? Don’t think that. One day, after you’re gone, your children or grandchildren will think of something they had always meant to ask you. Without a family memoir, those details will be lost to history.

Take a step forward today. Buy a book like the one John Geertsema’s family gave him. I don’t know the title he used, but I myself have used To Our Children’s Children: Preserving Family Histories for Generations to Come, by Bob Greene. There are many other highly-reviewed options available from Amazon.com as well. The important thing is to choose one and get started.

Already have some stories down on paper? Email me to see if I can help you take the next step. I’ll take a look at your manuscript, recommend the level of editing service you need, and give you a pricing estimate.

Whatever your next step is, remember to enjoy the process as well as the finished product. It’s all part of sharing your story!

Not sure about the difference between an autobiography and a memoir? Compare John Geertsema’s project with Bea Hoek’s in my next post—Cancer Freedom: a living memoir.

2 thoughts on “<em>The Geertsema Chronicles</em>: an exercise in successful autobiography”