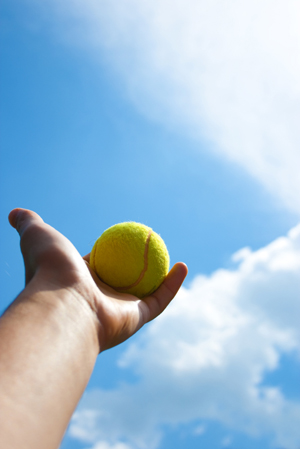 I grew up playing tennis. Why? Mainly because my dad worked for Victor Sports, Inc., an international distributor of tennis racquets. He believed in his company, and in order to become a better employee, he took up tennis and learned as much as he could about the game and the equipment.

His genuine enthusiasm converted the entire family into tennis players. In grade school, we took tennis lessons through our local park district, and we got together with other families to spend time on the courts. In high school, I played on tennis teams all four years, both doubles and singles, and my brother and sister played as well. I drifted away from the sport in college, but I later came back to it, and today I still play most Saturday mornings and Wednesday evenings throughout the spring, summer, and fall. (My dad is trying to talk me into a Friday night league too!)

The influence of professionals

Because of our family’s interest in the game, there were also times when my dad took us to professional tennis matches. And watching Wimbledon on TV every summer was also a family tradition. Seeing Bjorn Borg power through the finals for five years was exciting, and it made us all the more eager to grab our racquets and try imitating his topspin or his two-handed backhand.

Now, we never entertained any ideas of grandeur—we had no dreams of replacing Borg on the pro circuit, or winning any level of recognition—we just liked playing. We enjoyed the exercise and the competition and the minor improvements we could make to our game.

Watching the pros didn’t replace our own game; it inspired us to play more. It let us know that a whole other level of play was out there, that the game was bigger than our park district or high school, that we could keep learning, keep playing, keep getting better and enjoying it more.

The same is true of Bible-reading.

In “3 Reasons Christians Don’t Read the Bible,” I made the claim that a lot of Christians prefer to depend on professionals to read the Bible and explain it to them:

Whether it’s their own priest or pastor, or a celebrity theologian like Rick Warren or Joel Osteen, most Christians would rather be fed Biblical truths than feed themselves. And it’s true, religious professionals are probably better at gleaning, understanding, and teaching those truths than we ordinary amateurs. After all, they’ve had more practice. And if they’re better at it, why not just let them do it?

Rick Warren might be a better Bible-reader than you. He might understand the Greek language and ancient Jewish culture, and he might have an amazing natural ability to mine gems of truth out of a text that makes no sense to you. You might be able to learn a lot from listening to Rick Warren.

But that should not replace your own Bible-reading.

The point of Bible-reading (and of tennis, or any form of exercise) is not to become professional. Some people will, and that’s ok. But the rest of us are doing it just to become stronger, faster, sharper than we were before. The more we participate, the better we become, and the more we enjoy the game.

So if you’re reading The Purpose-Driven Life instead of the Bible, put it down! If you are watching Joel Osteen instead of wrestling with Leviticus, turn it off! Rick and Joel can’t transform your spiritual life; only God can. And He dwells within the pages of His Word. Let Him out!

He’s not expecting a blazing forehand or a rocket serve. He’s not going to judge you for not being a pro. He just wants to spend a little time on the courts with you.