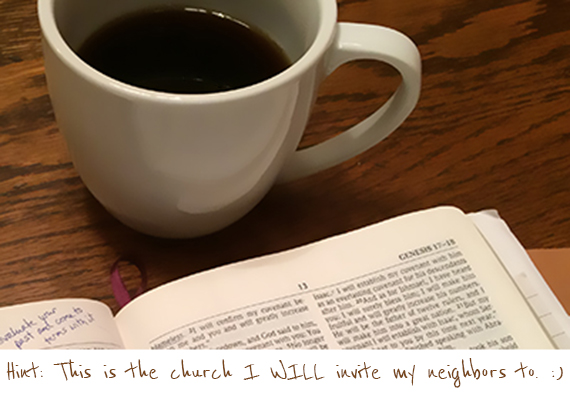 It’s hard to invite my neighbors to church without it sounding like there’s an ulterior motive to my friendship. As if I’ve decided to be their friend so that I can invite them to church. I don’t like the way that feels.

Relatedly, I think sometimes Christians invite people to church so that those people can “hear the gospel.” But I feel like I should be able to explore that good news with my neighbors myself, rather than relying on a professional Christian who doesn’t even know my neighbors to do it for me! Maybe there’s an AA parallel here: I don’t think a recovering alcoholic would say to an alcoholic friend, “You really should come to a meeting with me; it could change your life.” I mean, he might, but typically I think an alcoholic first decides he wants his life to change; then he asks a recovering-alcoholic friend how his life changed; then he starts going to meetings to support the new life that he wants. And my sense is that all recovering alcoholics are able to explain their life-change to their friends without sounding judgmental.

“You’re won to what you’re won by.” Have you heard that axiom? It means, for example, if you became a Christian at a Billy Graham crusade, you’ll think evangelistic crusades are the best way for other people to meet Jesus. If you became a Christian because someone invited you to church and you heard a powerful sermon, you’ll think other people need to hear a great sermon in order to learn about Jesus. If you became a Christian while studying the Bible at your neighbor’s kitchen table, you’ll invite other people to your home to explore what the Bible says. I would rather have more people wrestling with the Word around my kitchen table than sitting in a pew nodding at the preacher. And I would rather have the people around my table also invite people around their tables who will go on to invite people around their tables. That’s the grass-roots model I want to attract people to.

Now, if my neighbors happen to ask me what my church believes, and if they express an interest in seeing it for themselves, of course I will happily invite them! I love my church, and I love having other people share Sunday mornings with me.

I think waiting for my neighbors to ask me is the only way to overcome the baggage, avoid ulterior motives, remain responsible and active, avoid over-simplifying spirituality, and reproduce a church based on relationships.