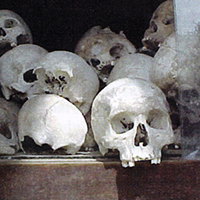 On top of my bookcase, where I almost can’t see it as I’m seated at my desk, is a piece of a human bone. A thick, three-inch fragment.

It shocks me when I catch a glimpse of it, even though I am the one who put it there.

For a while, it was on my desk, next to my keyboard. That seems flippant, but I didn’t mean it that way. Instead, I felt I was honoring the dead—for each time my eyes rested on that weather-worn bone, they filled with tears again.

During the weeks leading up to my Cambodia trip, when I would tell people where I was going, the response was usually mild confusion, something along the lines of, “Cambodia? Really? Why?” My father asked, “It’s not exactly safe there, is it?” A co-worker half-jokingly labeled it “The Trip Nobody Else Wanted.” And a lady at my church hugged me goodbye, wished me a good trip, and cheerfully advised, “Don’t step on any landmines!”

The Khmer Rouge murdered or banished the wealthier, educated professionals of Cambodian society. The remaining population were reduced to brutal slavery. Cities were bombed. A lush countryside was littered with the bodies of millions of victims.

This reign of terror lasted from 1975 to 1979, and the Cambodia I saw in 2000 was still scarred and crippled. Streets were unpaved and rutted. The marketplace vendors offered pieces of wartime artifacts as souvenirs. A lot of locals were missing limbs, victims of landmines that still dot the countryside.

Now, I don’t understand all the politics behind the war that spilled over into Cambodia, but my trip brought me face-to-face with the effects.

Tuol Sleng, the Cambodian Genocide Museum, is a compound of five buildings that had been an elementary school before the Khmer Rouge took over Phnom Penh. Comrade Duch, a Khmer Rouge commander, turned the school into a prison where people were brutally tortured and killed. Each of the classrooms was turned into a cell. Some housed individual prisoners; others held large groups at a time.

What makes this museum so powerful is its simplicity. Most of the rooms and artifacts have been left exactly as they were found in 1979 when Vietnamese troops forced the Khmer Rouge out of the city. The Vietnamese found in each room a body chained to an iron bed, left there to rot when the persecutors fled. The officers took a photo (please, click the link) before removing the body and burying it in a plot next to the building. Large, framed prints of those photos now hang on the walls of the rooms, making the space a sort of shrine to the victim who died there. A few signs have been added to explain what happened, but nothing is roped off or under glass. You can walk into each room and touch the shackles that held each prisoner; you can see the blood stains still on the floor; you can grip the barred windows and feel your heart pound.

Tuol Sleng was a place where city people—educated businessmen or government employees—were killed. After lunch we drove out to the countryside, where thousands of peasants had been slaughtered. This site too is haunting in its simplicity. Looking across the field, you see only grass and trees and paths around a series of large pits. It doesn’t look like much, and there are few signs or explanations. But slowly you realize that each pit was a mass grave for hundreds of victims. When you look closely along the worn paths, you find fragments of clothing, bones, and teeth.

That’s where I found the bone that is now on my bookshelf. It was nestled in the grass along the edge of one of those pits. I hesitated to reach for it, not wanting to dishonor its owner any further. But it seemed less honorable to let it lie there, forgotten.

The bus ride back to town that evening was very quiet. The group had been stunned by the enormity of the genocide that decimated a once proud nation of quiet scholars. And the fact that we had been so absolutely unaware made us feel even more helpless and guilty.

When people ask me how I can believe in a God who allows evil to happen, I think of Cambodia. I think of the one-legged children begging in the streets. I think of the social workers trying to rebuild a nation whose teachers, professionals, and elders have all been wiped out. I think of how heavy the hopelessness felt as I stood in the shadow of a tower of skulls.

I think of the human bone I hold in my hand.

But I also think of Vannary, a bookkeeper in the office that hosted my trip. Vannary lost her whole family to Pol Pot’s horror—father, mother, sisters, brother, all killed in front of her eyes. Vannary was with us while we toured Tuol Sleng, but she stayed on the bus. She didn’t want to alter our plans, but she was not able to face what she knew had happened inside those walls. Certainly not in the company of oblivious tourists.

After supper that evening we gathered in the hotel conference room and sang an old song together:

Why do I believe in a God who allows suffering? Because He is also the God who overcomes it. His answer is not always to protect us from it. But He does promise to walk with us through it.

Much like Vannary, Cambodia remains broken, fearful, scarred. But the tears I saw glistening in Vannary’s eyes reflect her hope in His resurrection power.

I need that glistening hope.

I know that hope is real. I saw it in Cambodia.

And I can feel it in my bones.