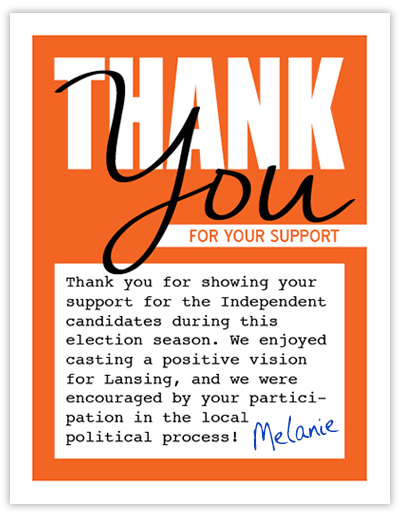 APRIL 2017 – It was a genuine honor to run as an Independent Trustee candidate, and though I was not elected, I have no regrets.

Among the six candidates vying for the three Trustee openings, the difference between the highest vote-getter and the lowest vote-getter was only 399. The greatest margin between any two consecutive vote-getters was 109; the smallest margin was 47. It was a close race.

I found it energizing throughout the campaign season to cast vision, brainstorm ideas, meet new people, and wrestle with possibilities. My disappointment with the election results does not diminish my enjoyment of the process.

But now, for the time being, I am looking forward to more “normal” ways of being involved in my community—with the addition of some new ideas that were sparked by people I met on the campaign trail.

Congratulations to those who were elected! You have challenging work ahead of you, and I am eager to learn from your example.