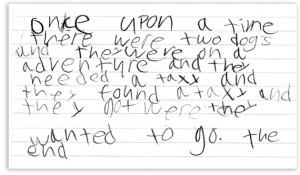 I recently had an opportunity to serve as a writing judge in a grade-school Fine Arts Fair.

Not what I thought

I had assumed that I could simply read all the entries, make encouraging comments on each one, and then sort of rank them from “best” to “worst” and award a first, second, and third prize.

Instead, I was given a 22-item matrix to complete. For each entry. Using a 5-point scale, I had to score items like, “The story has all 5 parts of a plot” and “The story has both a protagonist and an antagonist that you can easily identify” and “The main character is a dynamic character who grows in the story.”

(This was grade school writing! I had to Google “5 parts of a plot” in order to know how to score that item on the matrix!)

The cover letter included instructions asking me to “award heavily for effort and creativity”—but not one of the 22 items in the matrix had anything to do with effort or creativity. Spelling, punctuation, whether the entry was typewritten and double-spaced—these were all on the matrix. But there was not even a general comment area where I could indicate any extra consideration I was giving for other factors.

So I found the experience frustrating. There was such a focus on mechanics.

Now, mechanics definitely are important. You have to know where the commas go in order to communicate most efficiently and effectively. It’s helpful to know what the 5 parts of a plot are, so you can shore up the areas where your story is weak. Mechanics are important.

But a Fine Arts Fair should not be about mechanics. A Fine Arts Fair is where students get to show how they put those mechanics to creative use. (That’s what turns writing into art.)

One of the entries was a short, rhyming poem. It was a fun, light-hearted piece, and I could feel the joy of writing even as I was reading it.

But that piece didn’t score very well. It wasn’t typed. The genre of poetry was identified incorrectly. It didn’t have a “clearly identifiable setting.” So it lost 15 points right there.

My fear is that those students received their scores and were discouraged. Or that they will come to believe that good writing is about things that can be measured in a matrix.

And how can you teach that nuance in a grade-school classroom?

Do you remember entering anything in a Fine Arts competition? Or do you have kids who did? What kind of feedback did those entries get from the judges?

What I’m really trying to process is, Are school Fine Arts Fairs helpful for encouraging creativity in young people? Or is there a better way to give kids opportunities to flex their creative muscles?