A year ago, when I first saw the Goldie Taylor video I’ve included below, I knew I wanted to blog about it. I didn’t know exactly what I wanted to say, but it stirred up emotions in me that I wanted to process by writing about them.

All these months later I still haven’t quite processed those emotions into a cohesive article. But I keep running into experiences and interactions that remind me of this video. So, rather than wait for all the ingredients to gel into a pulitzer-worthy feature with an inspiring story arc, I think I should just start by doing something, getting some thoughts down in black-and-white (so to speak). I hope you’ll forgive the roughness of this draft.

It brings tears to my eyes, literally, to hear Ms. Taylor’s 1899 show-me-your-papers story, and to realize that we are doing the same thing in 2012.

I’m embarrassed by that. It makes me want to apologize for being white.

And I’d like to think that the arrogant white billionaire so proud of the disrespect he shows to the President is alone in his insolence. But I’m afraid he’s not.

I had coffee the other day with a group of Christians, including a good, Christian man whom I have a lot of respect for. We were bemoaning the dearth of confidence-inspiring political candidates in our small village. When the topic turned to national politics, this good, Christian man called President Obama something that I couldn’t quite hear, but it included the word “devil.”

Now this was stunning to me in and of itself. But it was also ironic, because a few minutes earlier, about local politics this same man had said, “The only thing you can do is vote for the one with the most integrity.”

Honestly, I don’t know if voting “integrity” is even a viable strategy. My current local administration is made up of good, moral people, but they don’t seem to be able to stop the decline of our village. And Jimmy Carter gained a reputation as a man of great character who was one of our nation’s worst presidents. So voting “integrity” may not be smart.

Still, it’s the only strategy I have—because I don’t understand politics. I can’t follow which policies will have what effects on which people. I don’t remember who stands for what, and I don’t know how to interpret the claims they make. I don’t know who to believe. I can’t discern truth from spin. I’m not proud of this, but I don’t know what to do about it. It’s like a learning disability I have.

So I tend to rely on my judgment of the candidates’ character in order to decide which way to vote. In 2008, I concluded that Obama had more integrity than McCain. I admired his strong marriage, his proud fathership, his community ties, his church attendance, and his writing skills.

And maybe this is racist, but I felt like it was time to have a black man lead our nation. America’s Presidency should be more reflective of America’s population than it has been for the past 200 years.

And maybe this is naive, but I’ve really been surprised by the racist jokes, cartoons, innuendos, and affronts that resulted. I honestly thought we were pretty much past that. Apparently we’re not.

Is this how it always has to be for “the first one”? Barack Obama is the first black President of the United States, but he’s not the first black person to break a barrier, or to give white people reason to dismantle our stereotypes. We seem unable to apply truths proven before (by Jackie Robinson, for example) to new situations (like President Obama). Will we go through the same jokes, disrespect, and fear the first time a woman is elected? The first time a Mexican is elected? Why do we have to start all over again—Every. Single. Time. It’s heart-rending.

“Show me your papers”? How dare we. And how ironic that Barak Obama’s “papers” reveal credentials that would place him in a class above his wealthy accuser.

I do not know what President Obama’s legacy will be. I can’t defend his politics—not because they’re indefensible, but because I am incapable. And I can’t prove his integrity—I’m fully aware that the character I believe he has may be nothing more than a figment of media spin. 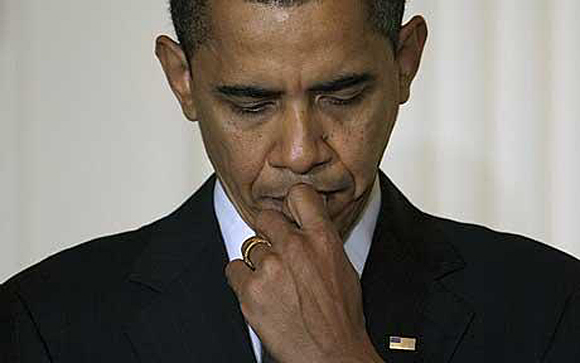 My President—our President—deserves more respect than he’s been given. From a certain egotistical billionaire certainly, but also from regular people like me in churches and coffee shops across the country.