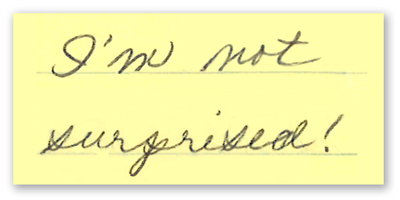 When I was a senior in high school, the entire student body gathered for an Awards Assembly at the end of the year. The awards included National Merit Scholarships, various college scholarships, Presidential Academic Fitness Awards, Student Activity Pins, Athletic Awards, various Department Awards, and a Citizenship Award. According to an issue of the school newspaper that I still have in my files, I won several honors.

I came home from school that day, and my parents were both at work. So I spread out the pins and certificates and ribbons I had won and left a note with them: “Look what I won at the Awards Assembly!” Then I went outside. (The internet hadn’t been invented yet, so what else was I going to do?)

Later that evening, I found the note I had left. My mom had replied with three words: “I’m not surprised!”

No gushing. No hype. In three words, my mom managed to affirm her high expectations as well as my achievement. In essence, she was saying, “Of course you did well—I’ve never expected anything less from someone like you.” And in doing so, she subtly shifted the burden of accomplishment from “doing great things” to “being a good person.” What a gift!

Yes, I still have the medals and pins and certificates—they’re in a box in my basement, and I had to re-discover them in order to write this post.

I couldn’t find the note though. (The image above is a reproduction.) But it turns out finding the note wasn’t necessary. Those three words are written on my heart, and they helped shape the person I am today. They are evidence of a mother’s pride that is so matter-of-fact I can almost take it for granted, yet it still encourages me to be worthy of it.

12 thoughts on “A mother’s affirmation”