My grandfather is now in a nursing home, following a series of medical events originally triggered by a broken hip. There have been a lot of ups and downs in his journey of the last six weeks. I’ve been particularly intrigued by the changes in his command of language. 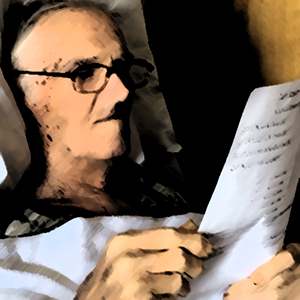 He can still read words on a page—I think. Sometimes he seems to simply page through the newspaper “as if” he’s reading; other times he’ll surprise me and read a headline out loud to me and comment on it.

And he still has many of the skills of conversation. He listens and nods and makes various expressions as if he’s participating. But, often now, when he talks, the words are not correct, though the intonation is. It’s like he has maintained the rhythm and cadence of conversation even while his vocabulary is slipping away.

What’s also interesting is that I feel like I can, in a sense, understand what he’s saying, even without the words.

It’s not like I could repeat the content of these conversations, because there really is no content. But I can sense that he is simply participating in his own version of small talk, just as a way of staying connected with family.

So I participate too. When he points out the window and asks, “What did he do with that gadget?”, I respond with something like, “I don’t know; it was there yesterday.” And he shrugs and returns to his newspaper. I have no idea what he thinks he was asking about, and maybe my answer sounds like nonsense to him. But it doesn’t matter. Mainly, he’s letting me know that he’s not completely lost in his own thoughts or unaware of my presence or his surroundings.

He’s using whatever words he has to let me know he is still here.

And I’m playing along to let him know that I know.

Words are simply containers. They hold the meanings we all assign to them, and we use them to carry our thoughts and share those thoughts with others. Gramp’s words no longer convey the meaning they were designed for, but they are not empty. They contain little pieces of our relationship, little understandings that go beyond words.

16 thoughts on “Beyond words”